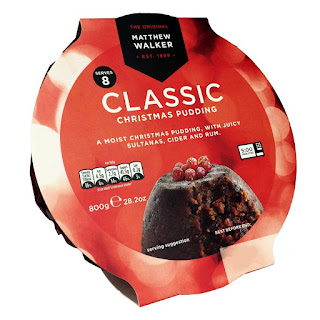 We were recently catching up on some of the vlogs we like to watch and were surprised when this American who has been living in Britain for a while, didn't know what a Christmas pudding was.  Now, before I continue, I will admit as long as I've been married to my British husband, I've personally never had one, simply because Dominic's not a huge fan.  But, I know they're a longstanding tradition in the UK.

So what is a Christmas pudding?  Well, the tradition dates back to medieval times and for this reason, the pudding is sometimes also called plum pudding, after the pre-Victorian term "plums" meaning raisins.  It's traditionally made with 13 ingredients, symbolizing Jesus and the 12 apostles.  It's basically a fruit cake, held together with egg, and moistened by molasses or treacle, brandy and other other types of alcohol, and seasoned with spices like nutmeg, cloves, cinnamon and ginger.   The mixture is then boiled or steamed and aged for (sometimes) months, the alcohol helping to preserve the cake.

Now days most households purchase their Christmas pudding pre-made and simply boil, steam, or even microwave it before serving.   Brandy is then poured over the cake and it is lit on fire when served. It's then eaten with cream, custard, or brandy butter!  We have several on offer in our Amazon Shop, that range in prices, the one pictured in this post being on the lower end of the spectrum, but I am sure they are all fabulous!

Have you ever eaten Christmas pudding?  What do you think about it?
Email ThisBlogThis!Share to TwitterShare to FacebookShare to Pinterest